Hello world! As a programmer it’s impossible not to use the most universe first sentence of any user interface system. Although wordpress doesn’t really need my help right now, so I’m free to continue and write a post with something more interesting. This will be quite a monumental post, as I will try to sum up last year to get you up to speed. 2017 was an insane year for my creativity, boosted by the purchase of my first 3D-printer, a Prusa i3 MK2 in December of 2016.

It is more than a bit ironic that I’ve been working with electric motors, and practically all ingredients found in a 3D-printer for over 10 years, still I had not jumped on the train. I told myself that the quality of the cheap printers wasn’t good enough for what I wanted so I had tunnel vision towards an SLA-printer (resin based, if you’re not into printers). However, in late 2016 when I saw the results that the Prusa could give, I could no longer wait. Boy did it not disappoint!

I already had a bit of a head start you could say, as I already knew a fair bit about CAD, having used Pro Engineer since university. My knowledge of CAD was still quite limited as I prior to purchasing the printer had no way of turning the drawings into reality other than printing the sketches on paper and building by hand, if I would not send it off to a workshop, but wha’s the fun in that? Now seeing the parts come out of the printer was so incredibly satisfying! From having used Pro Engineer I started searching for an alternative, as a hobbyist Pro Engineer is way out of touch financially, and I found Fusion 360 from Autodesk.

My choice of printer fell on the Prusa i3 MK2 since it was receiving the highest score on virtually every review I could find, and this choice turned out to be a really good one. Prusa is unlike many other manufacturers not too focused on looks, rather function. 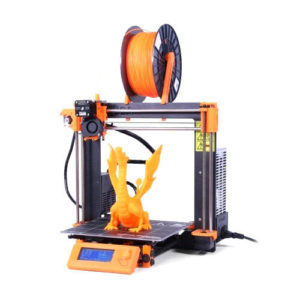 This machine is an awesome companion for anyone who is creative and likes to invent, draw and imagine things and have a desire to realize them in physical form, regardless of it being scale models, role play figures, games, toys, home appliances, or any type of art from abstract sculptures to flower pots. It’s especially nice to be able to be creative in a way that would otherwise need a workshop, something that many of us living in an apartment doesn’t have.

This particular machine has a build volume of roughly 25 x 20 x 20cm which means quite large objects can be built. If you are unfamiliar with the process, it’s basically pretty simple. The machine melts a plastic and extrudes it through a 0,4mm nozzle and builds up the object layer by layer. These layers can be of different thickness depending on the quality wanted, fine layers means long printing time but smooth surface. Thick layers means faster printing, yet rougher surface. Larger objects are commonly split into many pieces, especially mechanical objects that are often built up of many individual smaller parts.  The heart of 3D-printing is the “Slicer”, a software that takes your model, slices it up into layers and tells the machine where and how to lay the material.

The printer enables me to have an entire workshop in a cabinet under my desk in the living room. This process is called “additive manufacturing” as it adds material layer by layer. Traditional manufacturing mostly involves removing material, starting with a big “chunk” och some material and cutting, sawing, grinding, sanding away material until the desired shape is obtained. This is usually not an appreciated exercise in a small apartment, especially if it’s shared by more people than the creator him/her self.

The video above shows the building process I was used to when building models prior to getting the 3D-printer. Although this specific building process cannot be replaced by 3D-printing due to the weight of the material, it was refreshing to shift time from grinding/sanding/cutting to planning and drawing, and the physical building work being the assembly and painting instead.

This spot light uses a high power LED as light source and can be powered through a USB-port if the correct resistor is put in series.

Click here to read more on the Thingiverse page.

Most time during the year has been spent on te OS-Railway project. It all started as an attempt to print parts to my sons Brio train system, but the narrow turns and steep angles made it hard to design trains and cars, so I decided to develop a complete toy/model train system from the ground up, specially adapted to suit the 3D-printing process.

The system is based on O-scale (32mm track width) and everything is designed to be printed except screws, wheel shafts and electronics. The material (in this case PLA) has way better characteristics than I anticipated and can very well be used for functioning mechanical parts. Even the wheels on the train cars and locomotives is made of PLA. Even though I’ve mostly built flygin models and isn’t really interested in trains, it was refreshing to for once build something that isn’t weight critical! The whole project is published on Thingiverse, downloadable free of charge. The hope is that others will add parts to the system so that it can grow into a community project with more participants.

The grand finale of 2016 was the wifi controlled Hectorrail 141 locomotive which contains a 4WD boogie, NodeMCU board with wifi and built in web server. The files for 3D-printing is available for free on Thingiverse, as well as electronics schematics and source code! You can click here to view and download the files.